Monday, June 12 we're playing the Hampton Beach Shell at the beach, 7 - 9:30 pm. We're part of the Sea Shell Stage Nightly Shows series.   The weather looks great, so come on out to the beach for a great night of classic rock.  The outdoor shell amphitheater is located on the beach across the street from the Hampton Beach Casino.

See you all Monday night at the beach! 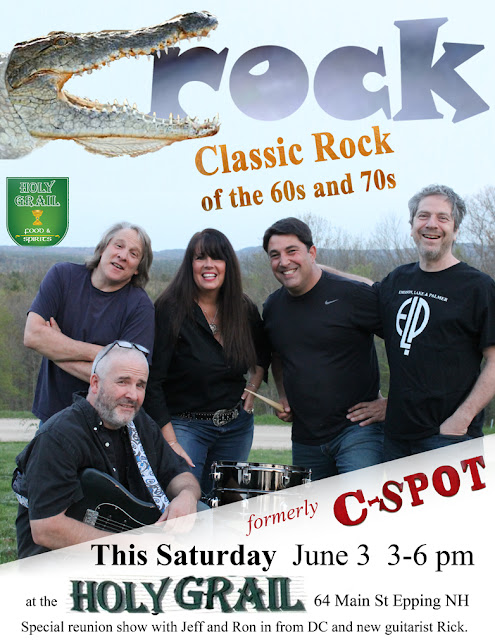 In January Ron the drummer moved to DC.  Jeff the guitarist followed him there in April.  We've found a new guitarist, Rick, and thought we found a new drummer, though that's currently up in the air.  Some bookers were saying the C-Spot name was too dirty, so we're taking the opportunity to change the name along with the new personnel.   We haven't decided on CRock or C-Rock -- come to the shows and tell us which you like.

Ron and Jeff are returning for a one time show in Epping this Saturday, June 3, 3 to 6 pm at the Holy Grail.  It's part of the Holy Grail's 9th anniversary party and should be a lot of fun.  Our singer Suzanne worked at the Holy Grail when it first opened.

Monday, June 12 we're playing the Hampton Beach Shell at the beach, 7 - 9:30 pm.  We're part of the Sea Shell Stage Nightly Shows series.  For that show we'll have our ringers -- additional players Kevin Herrera on guitar and Dave Hamilton on drums.   Kevin tours with the world renowned Eagles cover band "The Long Run" and has a successful solo career (youtube).   Dave is in a few bands in the area and beyond.  He hosts Gig Gab, the podcast for working musicians.

Last but not least we are very happy to announce we have a new steady guitarist, Rick Landry.  Rick's been playing in local bands for the last 40 years or so and we're thrilled to add him to the lineup.  He'll be joining us at both gigs for a set.  We're giving Rick a bit more time to learn the material before we drop him in the deep end as the sole guitarist in CRock.
.